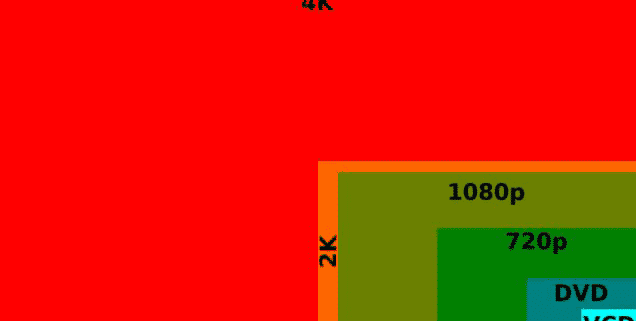 TV manufacturers have to come out with something new each year to get people to continue buying new TVs. Last year there was a big push to get everyone on 3D TVs but watching 3D TV is complicated. If you watch alone, it’s fine – all you need is a special pair of 3D glasses. But inviting a bunch of people to your house to watch a 3D movie would involve buying special glasses for each person. The glasses aren’t interchangeable either; they only work with a specific brand of TV. Therefore, I think we’ll see mainstream 3D TVs going the way of the Beta tape.

This year – and actually starting last year – the manufacturers have been pushing 4K TVs. To complicate matters, there are now budget-conscious 4K monitors.

What’s the benefit? On a TV, 4K offers an incredibly sharp picture. Nowadays, most movie theaters project digitally in 4K. If it works well on a giant movie screen, imagine how sharp it’ll look in your home. Well, you’ll have to imagine because it’s pretty much imperceptibly sharp. However, most of us can’t tell the difference between 720p and 1080p from eight feet away, so more resolution won’t make a big difference in your home theater unless you’re projecting it on a gigantic screen yourself.

That all changes when you move your face a foot away from the screen, much like you do with your smartphones and tablets. Nowadays, it’s hard to find a new tablet that doesn’t have an ultra high resolution screen because it looks so good. That’s why Apple introduced retina displays and everyone else followed along. They’re easier to read and they make great images look a heck of a lot better. 4K monitors can provide a similar experience on your desktop computer, and that’s very appealing.

Why You Should Wait And Buy A 4K TV Later

If 4K can be the “retina display” for your computer then why shouldn’t you get one? The ones worth buying (such as the Sharp 32″ PN-K321 or the DELL UP3214Q) cost almost $1 per horizontal pixel. The more affordable options (such as the DELL P2815Q and UP2414Q) use low-cost panels that really don’t look very good. You’ll get higher resolution, but at the cost of good color representation and great viewing angles. You’ll pay less for a lower-resolution monitor with a great panel, and that’s just a better buy at the moment.

You can pick up a 4K television to use as a monitor instead of one designed for a computer. You’ll end up with a high resolution display for less than the actual monitors, but it will still be a cheap panel display – not as good color, poor viewing angles, etc.

Finally, even if you want to spend the money on a great 4K display, you need a computer with a graphics card that can power it. Many Windows desktops are up to the task, but few Macs support 4K resolution (you need Thunderbolt 2) and Apple has poor support for 4K displays at the moment. (Supposedly OS X 10.9.3 will fix that.) If you can get past all these hurdles, you have to remember that you’re getting the most out of a 4K display when you’re in high DPI mode which diminishes the effective resolution. Basically, to get those super sharp details you won’t get a 3840×2160 workspace, but rather an extra sharp 1920×1080 one.

4K displays aren’t cheap enough or useful enough to recommend to the masses – at the very least, wait until the 2014 holiday season.

Narrative Clip: A New Kind of Camera
Scroll to top